Twelve Years, Give or Take. 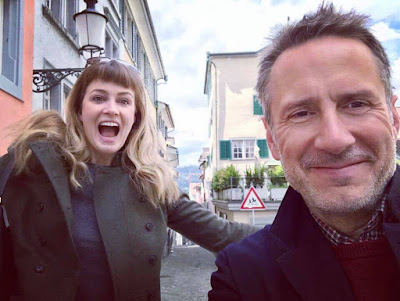 Twelve years ago or so, I winked at a guy on Match.com. Sure, winking's kind of a wimpy way of getting a guy's attention. But for me, I was practically throwing myself at him. I'm subtle that way. My flirting capabilities have barely evolved from running up and punching the boys I liked on the playground.

Despite the fact that I had no photo on my profile (amateur), this incredibly dashing and intelligent lawyer responded to me. He said it was my wit that attracted him. I had written a rather insane profile, in which I listed all my likes in dislikes in the most absurd fashion.

He also added that he shared my various likes and dislikes, including a seething distrust of old ladies.

"In fact," he wrote. "I just splayed an old blue hair across the sidewalk this morning on my way into the office."

The man called me a smart ass in his opening remarks and then used the word "splayed." I think we can all agree I was pretty much toast.

We crashed into each other for a year and a half. Our relationship was intense and joyous. I don't think either one of us had experienced that kind of connection. Over-the-top. Hilarious. Adventurous. Easy. And oh-so-very chatty. Sitting with Fred was like sitting with my long-lost best friend. We talked for hours over dinner. For hours late into the night and early morning, our legs tangled together, with me pounding my fist into the mattress from laughing so hard. Ridiculous and passionate and somehow we each felt we'd met our match.

Until we broke up.

I know. That's not how this story was supposed to go. What can I tell you other than when we first met, we were both fresh out of relationships that had left us reeling? Our lives were complicated and we were still disentangling ourselves from the wreckage. It's not an unfamiliar story and it's often the story of the rebound relationship.

"Sometimes the best love stories don't have happy endings," my sister told me. And it rang true. It continued to ring in my ears for almost a year while we were apart. Until I decided to get him back, of course.

So I chased after that boy and punched him in the arm again.

Wouldn't you know, the sucker came back.

But twelve years ago, I winked at a guy on Match.com and he was funny and lovely and he set my world back to shining again. I felt smart and witty and wonderful and strong. He propped me back up, put a spit shine on me, and set me back out into the world. Not quite a new woman, but back to the woman I was before a bad relationship had stripped me down to nothing.

And isn't that something?

Happy Not-Anniversary, Fred. I love you a lot.