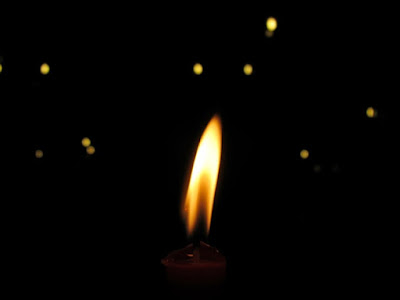 Life is so brief. So painfully brief. The image that keeps going through my head is my finger and thumb snuffing out the scented candles in my house. Just like that. That small. That gentle. That violent, depending on your perspective.

If you look at the time etched in the walls of the Grand Canyon, time seems immense and humanity small. Particularly our own.

If I look at my six-year-old daughter's cheeks, hers seems all the more brief than my own. And so much more fragile. So breakable. I think this thought and snuff it out as quickly as if touching a flame.

As quickly as death. Death. It can just sweep in and wipe out a life. Just like that.

I've written about my friends' deaths before. Oftentimes I don't publish because it feels selfish. It's not my death. Not my lover. Not my brother, sister, love. But each time a friend dies I'm taken aback by the briskness of the thing. Death shouldn't come so easily to those so young.

Another candle was snuffed out yesterday. Too soon. Too soon. I feel my heart beat the rhythm of too soon.

I don't feel right daring to write about it here. It's not my death. Not my husband, brother, son. A friend. A writer. A man.

The cancelled coffee date hangs in the air.

The words I wrote in the margins of his manuscript hang there too. Did he even read them? Was he well enough? He emailed to apologize for missing his deadline. I'd been coaching him off and on for the past year and a half or so. The deadlines were his to miss. Not mine.

A week and a half.

It leaves me as breathless as if I'd blown the candle out myself.