The Thing About Bullies 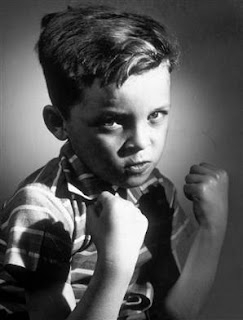 *This is an older blog post that I'm reposting for a friend who is dealing with a bully. Thought it might help those of you who are dealing with bullies too.*

Most of my life I have dealt with various bullies by either trying to stay under their radar or by trying to kill them with kindness. What heart of stone could resist my continuously applied sweetness and light? Surely I could tame the savage beast and hence be special enough for the bully to be kind to me and bully anyone who messed with me.

Turns out that's exhausting and doesn't actually give you much in return. I don't know about you, but I don't have people messing with me very often. Besides, it's usually the bully in question who is messing with me, so what's the point of befriending him in the first place?

Lately, I've had enough of bullies and I've been speaking up for myself. Of course the conflict riles me up and stresses me out. I prefer that everyone be nice, including me. But enough is enough. Turns out being a doormat just encourages bullies to wipe their feet on you.

So the other day I dressed down a bully. Oh, I went in for the kill. I sliced and diced the bully with the long knives of a verbal ninja and the bully didn't know what hit him. I was mostly stunned by how easy it was. When I actually lashed out and took the bully to task, he had nothing to say. It was almost like slapping around a baby. He fell apart under the truth being hurled at him, no holds barred, no filter, just the brutal truth. One after the other. Brutal truth punches left and right.

It wasn't nice. It wasn't pretty. And he probably felt completely emasculated and like a ginormous loser after I was done with him. I imagined I would feel really bad about it after all was said and done, but oddly, I felt empowered. Emboldened. "Don't mess with me." Hells yeah!

Kinda like a bully, right? I worried about that. Had I just turned into the aggressor? No, I was merely holding the line, announcing that I have boundaries and they will not be crossed. Bullies like to leap over your boundaries and then slap you in the face. This particular bully once knocked me around a parking lot and I had to get a restraining order to make sure he didn't leap over that boundary again.

Yet the guilt persisted. Was I now the bully? The bully had called ME a bully and that threw me off, I admit it. Doormats aren't accustomed to being called bullies. We want people to like us. And to have clean feet. So I did a little Internet research on how to deal with a bully.

In column after column I read about how it is best to avoid conflict with a bully. (Duh.) Article after article spelled out how the bully is actually a very psychically fragile being. A bully is merely the gruff mask to a terribly insecure ego. Wracked with insecurities, they lash out in order to protect their tiny, tiny egos.

Some articles went on to say that you should encourage the bully and praise the bully for what they do right and not mention where they fall short. Are you kidding me? If that's not a co-dependent and dysfunctional relationship I don't know what is. Jesus.

So should I praise the bully when he stops grabbing me by the arms and banging my head against the wall?

"Thanks for stopping your attack! That was really nice of you and showed a lot of restraint! Good job!"

Screw that. I may be trying to progress along the Buddhist path, but I'm thinking the Buddha wouldn't think I was showing myself compassion if I let a bully continue to scare me. So I looked around a little more, ignored the self-help writers and went straight for the politicians.

This is what I found:

"If you let a bully come in your front yard, he'll be on your porch the next day and the day after that he'll rape your wife in your own bed."

That's what I'm talking about. I'm not a bully. I'm not prancing all over someone else's lawn. I'm just telling one asshat to stay off mine.
Posted by Mandy_Fish at 8:49 AM 27 comments

Everyone Says I Should Do Yoga

I don't even want to tell you how many times I've been asked that question. And if you really are asking me that question, the answer would have been "No. I don't." I may have glared at you too.

I've been asked this so many times and it irritates me so much that it's become a standing joke between my husband and me. He sends me articles about yoga or if someone asks me that question in front of him, he hides a huge grin behind his hand.

Despite my general irritation with yoga, I have tried it off and on throughout the years. But it never took. Many yoga classes are too slow and too boring. Some are too fast and too confusing. I almost got into yoga last summer when I tried Hot Vinyasa. The sweat made me feel like I was actually accomplishing something. But most of the teachers were either too new-agey and soft-spoken or too hip and full of themselves.

But when my friend asked me to try a new place a few weeks ago, I said "Yes." I wanted to spend time with my friend. Plus I'm super stressed out and my body is super inflexible. I mean, despite not liking yoga, I've always known my body could benefit from it.

I carry my stress in my shoulders and neck. I'm a huncher from way back. Maybe it's because I was too tall too soon? As a young girl and teen, I hunched down to try and seem like I wasn't taller than all of the boys. And I don't handle conflict well. If there's tension in the room, my shoulders go up to my ears as though I'm shielding myself from a blow.

You try a lifetime of that and see if you're not wound as tight as a drum.

So I went to yoga.

And I liked it.

I found a class that just jived with me all around. It was after the kids went to bed. The class is never busy because it's the last one of the night and everyone else is probably going to bed. The yoga room is lit by candles and there's gentle music playing instead of hip modern tunes that are meant to make me push myself to the edge like a goddamn spinning class.

That's not what I need.

I need to lay on a mat in a hot room with only flickering candlelight.

On top of all that, it seems I've found a yoga teacher who speaks my language. He reminds me of the guiding teacher at my temple. He "gets" it. He's enlightened without being pious. He drops a lot of f-bombs and makes me laugh. He tells stories about letting go of all the shit that got you all riled up during the day and the way he tells it, it doesn't seem like some new-age pretentious bullshit.

The other night, as we took a big breath in and then slowly exhaled, something happened.

I thought of that place in my heart, the tender spot. That source of all my heartache. And instead of rolling my eyes, I allowed myself to consider it.

For a moment, while I exhaled, I imagined that I breathed out that hurt—flushed it out of my body, and where it once was, I was light.

Then I felt tears falling down the sides of my face. A part of me wanted to shake my fist at the room and say, "Damn you, Yoga! You finally got me!" But the other part of me felt … happy and relieved.

So I laid on the floor in the candlelight and kind of rejoiced in those tears.