I read some time ago that people feel more optimistic about life when strangers make eye contact with them. Scientists have found that people who live in large cities where there is little to no eye contact tend to feel more isolated. A small gesture, such as making eye contact or smiling quickly, can make a huge impact. 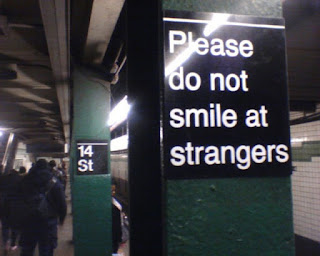 It reminded me of a story I read years ago in The Art of Happiness. Dr. Howard Cutler was exploring the mind of the Dalai Lama in order to find how the rest of us could be happier. As Cutler describes him, the Dalai Lama is always smiling, laughing or talking to people. Cutler noticed that when people were around the Dalai Lama, they too ended up smiling and laughing. 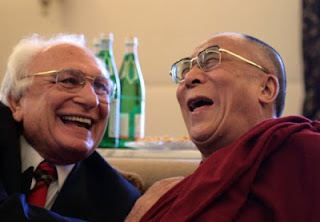 One incident in particular has stayed with me. Cutler describes the Dalai Lama waiting for an elevator in his hotel. The Dalai Lama turned to a housekeeper who was standing there and started talking to her. At first she appeared someone startled, but then as he asked her where she was from and spoke with her about her life, she clearly brightened up.

The next day the housekeeper was there waiting for him with another housekeeper. He greeted both of them warmly and spoke with them. The next day after that there were more housekeepers, and more and more each day until the end of the week there was a long line of housekeepers waiting to greet the Dalai Lama with smiles on their faces.

I found that absolutely profound. The Dalai Lama does not ignore the person standing next to him, even if it's a stranger. Now I know you and I are not the Dalai Lama and perhaps we won't get the same reception that he would get. But for many people, the Dalai Lama may be an odd-looking figure. What with his flowing robes and his foreign accent, some people might be put off by him. I'm not going to accept that as an excuse for me not to behave as he does. 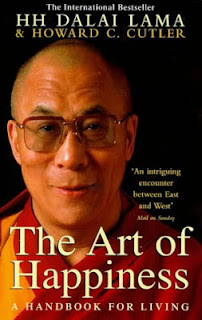 You see, I think we all want to be seen. We want to be recognized as a fellow human being. We crave understanding. I know all of that may not be contained in the briefest of smiles or a quick flash of eye contact. But perhaps the essence of it is? Maybe that's what scientists discovered in the people who lived in places where not even the least hint of humanity is recognized and shared as a matter of course.

I know it might seem dramatic, but I do believe the little things count. Hell, I even believe I can make a difference in the world. Ridiculous, I know. But I've been making eye contact with people for the past six months. I even give them a quick smile. I mean, I don't flash my teeth or anything. I don't want them to think I'm a freak and let's not forget I'm an introvert by nature. This is a real stretch for me. But I find it makes me feel better about the world. 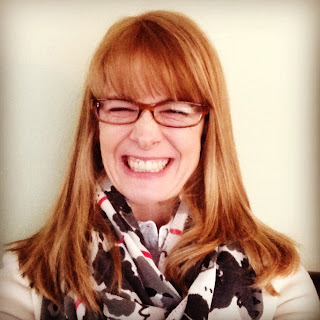 Even the act of smiling, however brief, seems to lighten my psychic load. I'm not much of a smiler. I'm more of an accidental scowler if you must know. But when I make eye contact with people and I force myself to give them a quick smile, it changes my mood. Just a touch. And sometimes, I'd say about 50 percent of the time here in Metro Detroit, people smile back.

And when that happens? I'll be damned. I do feel an extra spring in my step.

Who knew? Sometimes it's good to push yourself out of your comfort zone and try something new. Now let's hope I don't get mugged.

Email ThisBlogThis!Share to TwitterShare to FacebookShare to Pinterest
Labels: let's hope I don't get mugged, making eye contact with strangers, smiling at strangers, the art of happiness, the dalai lama