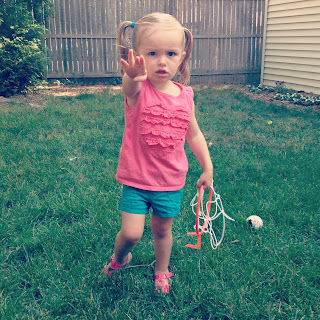 My husband and I are at the mercy of a hostile two-year-old girl. She is demanding. She is cranky. She speaks Spanish and we don't. She also speaks some sort of mispronounced toddler talk that all toddlers speak, but when you add in the foreign language, our mystification goes into overdrive. We don't know what the hell she's talking about.

"Más!" she yells from her high chair, banging her bowl on her tray.

"More, please," we say. Because we are patient, older parents we don't El Strangle her.

"Más PAYAYOO!" she hollers and bangs the bowl harder.

"What is she saying?" my husband asks, looking tired and bewildered.

"Si," I say and hand him another bowl of Lucky Charms. Or "Amaletos de la Suerte."

The reason our daughter speaks a language that neither one of us speaks is because my friend watches Grace while I'm at work. My friend is half-Colombian and she read that children who are bilingual have gigantic, bi-functioning brains which basically turns them into a race of super humans who will take over the world. So my friend speaks to my daughter in Spanish. It has resulted in the trilingual toddler we have today — and much confusion.

When we walk Grace to the park, she is happy to yell, "HOLA!" to the people we pass by on the sidewalk. When she sees the sky she points up at it and yells, "AZUL!" The grass, "VERDE!" And if a red bike happens to speed past us, she is sure to announce, "ROJO!"

When I'm at the park, I am somewhat embarrassed when the other parents hear my tiny dictator yelling, "MAS SWINGS! MAS SWINGS!" or when she points at their child who is wearing a blue shirt and says, "AZUL!" Which actually sounds more like, "ASSHULE!"

"Yes, that IS a BLUE shirt, Grace! Such a nice BLUE SHIRT!" I say and smile weakly at the offended parent, who clearly hates me.

I can never tell if the parent is more put off by the fact that my tiny dictator just called their golden-haired angel an asshole, or that I'm such a pretentious asshole that I'm teaching my child Spanish. They probably think I'm like those parents on The Real Housewives of New York, the couple who spoke to their kids in French and named them something like Jean Jacques and Francois.

Oh my god. People think my husband and I are Simon and Alex! 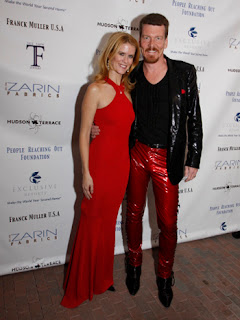 In addition to Spanish language, Grace is also learning about the Hispanic culture. For instance, one day when I came to pick her up I noticed she was drinking some sort of tan substance in her sippy cup.

"What is that?" I asked my friend. "Is she drinking chocolate milk?" I cocked my head to the side and narrowed my eyes.

"Oh, that!" my friend laughed. "She saw me drinking coffee and she wanted some! She kept trying to drink it out of my cup. So cute! So I gave her some of her own."

"Oh, don't worry! It's decaf!" my friend said, laughing and waving me off with a Colombian flick of the wrist.

Apparently it's normal in Columbia to serve babies shots of espresso. I now expect to pick up my daughter and find her sitting at her tiny table and chairs. Perhaps she'll have a tiny cup of café in one hand and a cigarette in the other.

"Hola, Mami," she'll say and continue speaking in Spanish to her dolls and stuffed animals. The doll is a refugee from Columbia who left her lover there in the hands of a notorious drug cartel. The bear is an ex-pat from France. He writes short stories and freelances for the New York Times. Hello Kitty is here on a study abroad program from Tokyo. She likes the electronic music festival in Detroit and finds the shopping superb.

They all turn and look at me like the rube I am.

Well, at least she's learning some manners, I'll think as I sit down to have a cup with her friends.