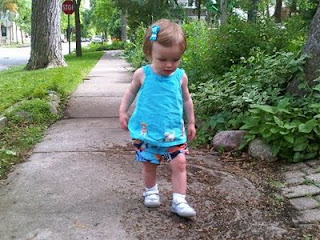 I mean, I couldn't help but think as I watched the twenty-two year old walk across the stage this weekend to receive his college diploma, that he's on the cusp of independence. He's about take his first tentative steps into adulthood. I'm sure his father would like to follow behind and hold out his arms to catch his son if he falls. Not unlike the way he wants to protect his one-year-old daughter as she navigates walking (and god help us) running.

I see the same overlap between my one-year-old daughter and seven-year-old son. This weekend she was fussy and a little feverish. I also noticed that she was drooling, which is not something she's done up until now. It was clear she was teething, as her top two teeth have just come in and now she's got almost all four bottom teeth in too.

In the same weekend, my seven-year-old son lost his two front teeth. Currently he is missing two on top, and two on the bottom. He has developed an utterly charming lisp in the process. So strange to have one child pushing those baby teeth in for the first time with the other is pushing them out.

I asked my husband what he would say if he had a friend who was about to be a father again after the older children had already grown. I know for some people the idea is something akin to horrifying. My own husband got quite a bit of ribbing for it at work.

At first I thought he was joking, but he made it clear he meant it. I have to laugh at anyone who can come out of the first year with a baby and say, "It's a piece of cake." But I stop laughing when I realize he's not kidding. I find it overwhelmingly touching.

I see my husband with his arm slung around his graduating son's shoulders and I see him walking his one-year-old daughter down the sidewalk. In both endeavors he has the same look, the same proud smile. He loves them, that much is clear.

Loving them, that part really is a piece of cake.

I wrote this post almost a year ago and never posted it. On second glance, I like it. Hope you like it too.
Posted by Mandy_Fish at 9:56 AM

Email ThisBlogThis!Share to TwitterShare to FacebookShare to Pinterest
Labels: buddhist parenting, graduating from college, learning how to walk, the dancing baby, the tooth fairy