We'll Be Here, Listening to You Breathe 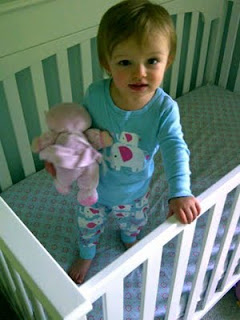 There's a striking age difference among the children in my family. We've got babies as young as my daughter who is one, and babies as old as in their twenties. But what strikes me is no matter how big or small, all of their parents continue worrying about them.

Just last night I put my own sturdy one-year-old in her bed and heard her throwing various stuffed animals out of her crib. The Soothe-and-Glow Seahorse is particularly heavy. It doesn't sound all that different from what I imagine a 20 lb. one-year-old body sounds like as it hits the floor. Then there's the kicking of the side of the crib to activate the Ocean Wonders Deep Blue Sea Soother that's strapped to the side of her crib. She kicks it to activate it.
My point is, there's a whole lot of ruckus going on in there and I think that smart little conniver is banking on freaking me out so I come to check on her to make sure she's alive. But because a pediatrician in my parenting group told me to leave that baby alone for 12 hours and I don't want her to wind up living a life of crime, I leave her in bed.
But I do stand outside her door with my ear pressed to it. And listen. I wait to hear the sounds of her breathing, or rustling around, or making whatever baby murmurs she might make. I also watch my sister talk on the phone to her 19-year-old baby (who doesn't like us calling her a baby) and the way my sister presses her head to the phone reminds me of myself. It reminds me of the intent way my brother and husband email, text and call their college-aged children – waiting and listening – to hear that their babies are okay.
But with the grown babies, they're not as easy to protect. It's not as easy as gathering them up off of the floor and covering them in kisses. It's not as simple as putting the plastic covers on the electrical outlets. You can't follow them around the house and prevent every fall.
More importantly, you have to let them fall. So they can learn how to pick themselves back up.
But I imagine my sister, my brother and my husband don't really see the grown adults their children have become. They still see these little babies in footed jammies, crying because they've bumped their heads. I'm sure they long to gather them up and make everything okay.
It makes me realize as I worry about my little baby sleeping in her crib, that it won't get easier. It gets harder. You get further and further away from the door, waiting longer and longer to know that they're okay.

I wrote this over a year ago and I guess I didn't think it was good enough to post. Now I like it. Hope you do too.
Posted by Mandy_Fish at 11:16 AM 31 comments

Sunshine on My Shoulders Makes Me Have a Biopsy.

I went to the dermatologist this morning to get my annual cancer check. I'm pasty and my husband is paranoid. That's why I go, in case you were wondering. If it were up to me, the less doctor's appointments, the better.

I've had this mole in the middle of my back that has bothered my husband since he met me. Or at least since he's seen me naked, which was not immediately after he met me. I'm a lady. Sort of. Anyway, the mole is dark. Which I guess translates to "cancer" in mole-speak. Over the past few years I've had a a general practice doctor, an oncologist and a dermatologist all look at it. They said it was fine.

But my husband is a worrier. And like I said, I'm pale. Like really, really pale. Most of the time I'm wearing a layer of Jergens Natural Glow self tanner and I'm still the envy of field hands. Most people would be surprised to discover that I wear self tanner at all because I am seriously pasty despite my efforts. As I see it, the self tanner takes the edge of the deathly sheen.

In addition to being pasty, I'm old. Old enough to have grown up in the 70s when sun protection wasn't really a thing. I think I have vague memories of Coppertone 4 coming out and my parents using it on me when we went to Florida, but aside from that, I really don't remember my mom ever putting sun protection on me. I'm sure she will object to this. Most of my memories before the age of five are suspect, I admit.

But back then, your parents sent you out the door first thing in the morning and they didn't see you again until you were hungry. So maybe you saw them at lunch and then at dinner. We spent our summers in the sun. There was no, "Wait, let me put this SPF 75 on you before you go and spend 12 hours on the face of the sun." I also recall getting so burnt in Florida that I had to go the hospital. I was throwing up from either heat stroke or sunburn, it's hard to say. They both happened in the same window of time. In any case, SPF 4 was not sufficient coverage for a pasty white kid like me.

My mother, on the other hand, used to oil herself up with Hawaiian Tropic Dark Tanning Oil. She smelled like coconut cream pie. She was slick and slippery when you'd hug her. In the summer months, you'd often find her laying out on one of our folding chairs on the back patio. Chances are she'd be drinking a Tab, smoking a cigarette and flipping through Cosmo while she browned in the sun smelling like dessert.

I didn't inherit my mother's ability to tan. I'm like my father — I pretty much alternate between pasty and burnt. There's no middle ground of "tan." That's not to say I didn't try to get a tan when I was a teenager. My friends and I would line large cardboard boxes with foil and lay inside them. We'd spread baby oil all over ourselves and shiver in the foil box over spring break in Michigan, trying to approximate the tan our other friends were getting on vacations in warmer climes.

Despite all my efforts, I never really got tan. I even spent a summer in the south of France as a foreign exchange student. I came back from the Cote D'Azur considerably blonder, but not much darker. Fortunately my failed attempts discouraged me from any sort of lifelong dedication to tanning. As soon as they came out with SPF 15, I was wearing it and I've worn every increasing denomination of sun protection as it has been unveiled.

My children, on the other hand, have barely seen the sun. I'm one of those freaky moms who insisted her infants wear long sleeves, pants and hats any time they left the house. In fact, I'm surprised they both didn't have vitamin D deficiencies. Now I slather my son with sun protection before he goes to camp. I send him with a baseball hat and tell him to sit in the shade if the counselors leave them outside too long.

It's a miracle he's normal at all.

Once he got a little bit of pink on the top of his foot from wearing flip flops and freaked out.

Okay, he didn't say the part about having cancer. But he did cry, even though his sunburn was just a sweet little pink blush. I wanted to show him the lobster red I had achieved as a child and say, "Back in my day when we had a sunburn it was a third degree burn and we were sent to the hospital!"

Anyway, this morning at the dermatologist, I told the doctor that I stay out of the sun and wear sun protection. She examined me from ears to toes. She asked if I had any moles I was concerned about and I said no. But then I reconsidered.

"Only, there is that one mole my husband is obsessed about," I said.

"It's the same size, shape and color as it's always been," I said. She was spending too much time looking at it and it was making me nervous.

"If it's something he's noticed we should take a look at it."

"I've had three doctors look at it and they said it was fine."

"Maybe we should take a biopsy of it just to be sure," she said.

"I'm not worried about it. He is. And he's paranoid. So there's no need to biopsy it or cut it off, I'm perfectly fine with it." I was rambling. Have I mentioned I hate needles?

"I'd feel better about it if we biopsied it," she said. The next thing I knew, I was lying face down on the table getting my back numbed with needles.

"Give me the green blade," the doctor said to the nurse.

Ha ha ha. Hilarious. I'm lying on a table in a paper gown getting my back cut open because I'm married to an obsessive (yet incredibly handsome) man. If the mole comes back positive for cancer he's so going to say "I told you so" and that will really irritate me.

I called him after the appointment to let him know that after all these years of worrying about the mole on my back, he would be pleased to know they had finally biopsied it.