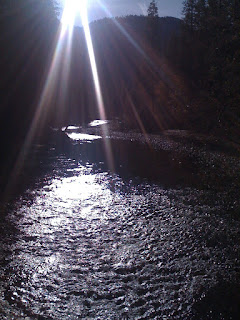 Sometimes I think that learning to voice our greatest fears is the very path to letting them go. We think we have some unimaginable burden that we could never share with another person. But then you stay up late talking to a friend or lover, and maybe you find a moment of safety and bravery — so you speak your truth.
Sometimes we are blessed to be heard and to receive the absolution of friendship. Of love. We are left more human, more forgivable and yes, lovable even. We may spend the rest of our lives discovering and re-discovering this. We will forget and re-learn over and over again that once we speak those fears, their power over us is diminished.
But the love between us? It increases beyond our greatest hopes. Oh to remember this. Stay, sweet Insight, stay just a moment longer.
Happy anniversary to my husband — that friend with whom I can share my secrets and fears and find acceptance there.

My friend built a fort for my daughter out of the living room chair and a blanket. Because he has carpentry skills, he used a broken-down cardboard box to support the roof. She loved the little fortress so much, she didn't want to come out.

"HOUSE!!!" she wailed as I tried to extricate her.

When I got home, I built her an identical fort out of a cardboard box, a living room chair and a big blanket thrown over it. It managed to stay intact for the most part, except for when she would grab the blanket and pull down on it until the cardboard roof caved in.

"HOUSE!!!" she wailed each time it fell.

"House!" she chirped each time I put it back up.

I remember trying to build a fort out of a blanket as a kid. I laid on my back and stuck my legs and arms straight up in the air to support the roof. I tried using a cardboard pole leftover from wrapping paper to act as a prop. I tried using throw pillows and stuffed animals as walls.

The trouble was, the blankets kept falling back down. Propped up for a moment, they'd soon return to brush my face and cover my body again. No matter how much effort and how many contraptions I'd build or finagle, the blanket fell down and covered me.

Today I was thinking about that blanket and how I could never keep it off of me. Sort of reminded me of depression. I've spent a lifetime propping it up and trying to keep it off. But every so often the cardboard scaffolding I've built gives way and I feel it brush my face and cover my body once more.

Sometimes I just want to lay down in the dark and give in to it.

But most times I brush it off and try to prop it up. I rummage around for the cardboard poles and stuffed bears in my head and build walls out of plush. Sometimes it all seems so pointless.

Building an imaginary fortress against pain.

But that inner kid in me doesn't care about logistics and logic. I hear my daughter's voice yell, "House!" and I put the structure back in again. She needs me to keep a roof over this house of mine. She needs the shelter of my joy.

I Meditated So Hard My Brain Exploded. 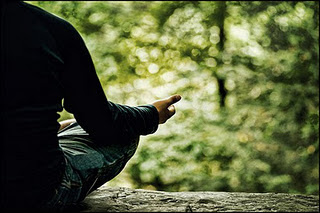 Not really. But I did meditate for 45 minutes straight which is kind of noteworthy for me.
Read all about it at my Buddhism blog: Buddha Mama Sans Drama.
Posted by Mandy_Fish at 12:14 PM 3 comments 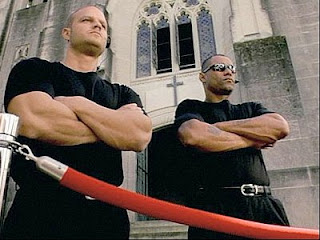 I posted on my buddhism blog, Buddha Mama Sans Drama.
Posted by Mandy_Fish at 12:58 PM 1 comments

Getting Laid at the Ho Ho Ho. 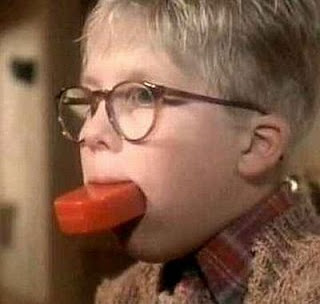 A couple of weeks ago my son got busted for using the F-bomb at school. He and a friend were saying it to each other at lunch to be big comedians. Ha ha ha. So hilarious.
His dad called to tell me the bad news. He also told me that he had already dealt with it and meted out the punishment, so all I needed to do was to listen to my son's confession when his dad handed him the phone.
"He's going to cry as soon as he hears my voice," I warned him.
"No, no. He's not. He's cool now," his dad assured me.
"Doesn't matter. As soon as he hears my voice, he'll cry."
"He really won't. We've already dealt with it and he's fine," his dad said.
"Okay," I replied and waited for him to hand the phone to the potty-mouthed criminal.
"Mom?" A quavery little voice inquired.
"Hi," I said.
"MoooOOOOoooom!" he cried, choking on his sobs.
Bingo. I win.
"I guess you were right," his dad said when he got back on the phone.
"Freud said the mother is conscience," I explained.
I agreed to go along with his no TV punishment for the crime. I was actually really proud of myself for not completely flipping my lid as I usually would. It's like I conserved karmic energy or something. I may have to make a note of this for future parenting.
Then, the other day, my husband and I were driving the kids to the Ho Ho Ho to get a Christmas tree. (Or as I like to call it, the "Buddhakamas Bush.") We were joking about an uptight person who's been awfully light-hearted and happy of late.
"He must have gotten L. A. I. D.," I said, spelling out the offending word.
"Laid!" my seven-year-old son shouted from the back seat.
My husband and I froze for a moment and stared at each other in horror. Then he collapsed in laughter behind the wheel.
"No more spelling words," I said.
I looked behind me at the beaming boy, so proud to be such a fast speller. Oy.
It looks like his step-dad and I are going to need to learn a common foreign language. The boy is fluent in filth.
I wonder what Freud would say about that?
Ha ha ha.
Posted by Mandy_Fish at 11:44 AM 40 comments