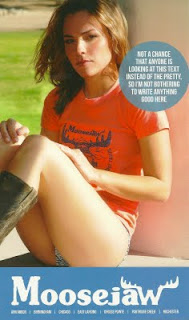 For some inexplicable reason, my local outdoorsy retailer, Moosejaw, has decided to become the American Apparel of Michigan. Or maybe it wants to be the Detroit version of Abercrombie & Fitch? Why should Columbus and L.A. hog all the sexy?

Don't even get me started on cutesy, self-aware copy. In case you can't read it:

"Not a chance that anyone is looking at this text instead of the pretty, so I'm not bothering to write anything good here." 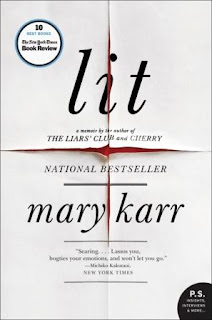 I just finished reading Lit by Mary Karr. To say that the book has moved me is an understatement. To say that I have laughed, cried, gasped and raged my way through the pages is truth. For the second time in my life I have considered writing an author to thank her. This is how much the book has meant to me.

I cocked my head at that.

I read her story and it was a journey of forgiveness. To forgive her mother, yes, to forgive her ex-husband, but most of all, to forgive herself. To put a cope of blamelessness over her whole life and everyone in it. At first that thought might be maddening if you have unresolved issues, yes. But if you've tasted forgiveness or hungered for it yourself, you can see its appeal.

The book is not for everyone. There were days when it threatened to sink me into depression. There were times I had to shut the pages and walk away from it. My husband would catch me sitting at the table, closed book in front of me, staring out the window.

I shook myself out of it. Just as I shook myself out of my own childhood and my own issues through ten years of therapy and twenty of Buddhism. I've done my work. I've let go of a lot. I'm a happy person today. Are there ghosts in my attic? Yes. Do they rattle their chains? Infrequently. But do they? Yes.

I finished the book and was left with a feeling of wonder at her forgiveness. Such a universal and encompassing forgiveness — a forgiveness that was given without being asked. Grace is like that. A gift given though undeserved. Light cast upon a darkness. A blessing for a sinner. Yes, please, God. Do that for me.

I desire forgiveness. I desire to forgive. I desire both to be given and received as unselfishly and as free from expectation as Mary Karr writes.

But I'm not sure how to do that. 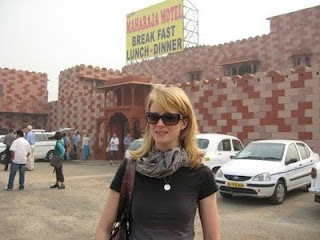 On the road from Delhi to Agra.
You can't tell from this picture, but something is amiss in my digestive tract.

Today I'm writing for Studio 30 Plus. If you're not familiar with Studio 30 Plus, you should check it out. It's a community for bloggers over 30. Of course I'm only 29, but they made a special exception in my case.

How to Suck at Meditating 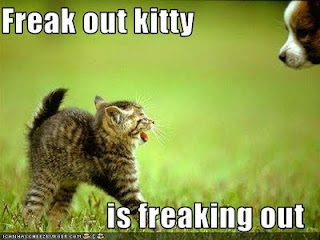 Buddhists Anonymous.
Posted by Mandy_Fish at 11:51 AM 5 comments

The Upside of Humiliation 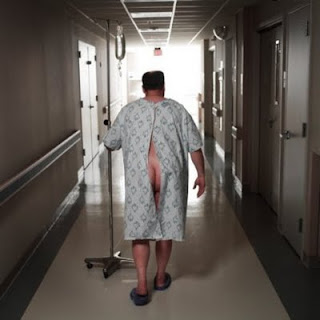 I confessed to my husband that I have a problem in my "nether regions."

I use that expression to reference a body part unmentionable. The good of the phrase is that it is vague and imprecise. It affords me the slight chance that the listener's mind might be diverted from the precise target of my humiliation.

Besides, I'm not willing to discuss precise nether regions in a forum where my co-workers, parents, siblings, friends, enemies and elementary school teachers can read it.

So I admitted to my husband that my non-specific nether regions might require medical attention.

He looked at me.

"But what if I need surgery?" I asked, leaping to the worst and most humiliating conclusion possible.

"Can you imagine?" I pantomimed spreading someone's cheeks apart. "Can you imagine laying face down on a table while a room full of medical professionals scrutinize that place?"

My husband paused and considered my dilemma.

"I'm going to say one thing," he said. "I'm going to say this one thing and it will make all of this better for you." He was certain. He was strong. He was full of conviction and handsomeness. Never in my life had I wanted him more.

"What?" The wheels in my brain creaked to a halt.

"Blog material," he said, nodding his head. We stared at each other for a long time.

And that, my friends, is why I blog. Humiliation is nothing if it makes for a funny post. That is the universal law. Someone said the other day that if you're a writer, you must write as if no one will ever read it. It's the only way to be any good.

My nether regions be damned.
Posted by Mandy_Fish at 1:58 PM 35 comments

Links to this post
Email ThisBlogThis!Share to TwitterShare to FacebookShare to Pinterest
Labels: humiliating surgeries, humiliation in the doctor's office, problems in your nether regions, this is what happens after you have children, unmentionable surgeries

When You Can't Fix It, Make Someone Else Happy 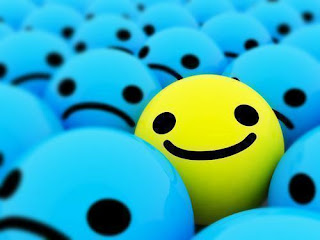 Many years ago when I was in an unhappy marriage, I got some advice from my therapist that didn't work.
It's not so much the marriage that was unhappy, but the two people in it. The root cause of our unhappiness was not each other. Unbeknownst to me, he was descending into schizophrenia. Me, I was trying to crawl out of life-long, low-grade depression.
I came to a point of frustration. Frustration with my husband. Frustration with myself. Frustration with the marriage itself. It was stagnant. It was institutionally and fundamentally sad. I felt helpless to change any of it, most of all myself.
"Sometimes when you are unable to make yourself happy, it can help if you try and make someone else happy," my therapist suggested.
This was new.
This was different.
This was mildly annoying.
Yet I did attempt acts of kindness for my then husband. I offered back rubs. I made meals. I tried to strike up conversation. I even left the couch and slept in our marital bed for a change. I spooned.
None of it worked. Not even a little.
I was even more miserable for having tried it and failed, and he didn't seem the slightest bit interested in any of my gestures. I chalked it up to some monumentally bad advice from an otherwise terrific therapist. Yet here I sit, a decade later, and I still remember that advice. It stuck with me for a reason.
What I have found is that I am able to follow my therapist's advice when it comes to my children.
For instance, I was thrown for a loop this weekend. I rather spastically and inexplicably threw my new Blackberry Torch in the bathtub with my baby daughter. I know! It seems impossible, but it happened. I'd been holding it a few feet away from the tub when it started to slip. Rather than let it fall harmlessly to the floor, I freaked out and started bobbling and batting at it until I hurled it high into the air, where it made an Olympic dive into a bubble bath.
I can still hear the splash.
I'll spare you the details of the three AT&T stores I visited, the multiple visits and phone calls, the black tape, the out-of-town husband, the one-year-old and seven-year-old children who couldn't wait that long in a store, the benevolent niece who accompanied me and talked me out of my cellular-induced emotional breakdown. (Slight exaggeration, but I was pretty riled and I'm normally unruffled by such things).
It all added up to me being a pretty high-strung madre by Sunday afternoon.
So I took my children to Chuck E. Cheese. There was so much built-up tension on the Saturday of the Smartphone Swan Dive, I knew something had to give. My seven-year-old son is a sensitive little soul. He was worried about me. He knew I was agitated, irritated and mad about my phone. He gave me a lot of moon-eyed looks of concern. I felt bad about that.
Because I couldn't fix me and I couldn't fix my phone situation until regular business hours on Monday morning, the only things I could fix were the two little people who depend on me. I packed them up and took them to Chuck E. Cheese for no damn reason on a Sunday afternoon.
I'm basically a parenting god.
My son was overjoyed. He couldn't believe his good fortune. My one-year-old daughter wandered around admiring the sights and sounds for two hours, uncomplaining and thoroughly entertained. She had a sweet little smile on the toddler rides and toddler slides. My son marched around with a cup overflowing with tokens and tickets draped around his neck like a paper garland.
That night, I went upstairs and examined my son's face as he slept, his arms wrapped around his stuffed kitty. Such a cherubic face. The round cheeks, the dark lashes, the tender little hand curled under his chin. He's such a tall, slim boy now and he's getting so big I can barely hold him, but in the darkened room I saw him for the little boy he still is. And he was at peace with his world.
I made somebody happy.
Maybe there's hope for me yet.
Posted by Mandy_Fish at 4:41 PM 38 comments

Links to this post
Email ThisBlogThis!Share to TwitterShare to FacebookShare to Pinterest
Labels: Blackberry Torch Song, Chuck E. Cheese, I should have gotten the insurance, Parenting, When are they going to make a waterproof cell phone?
Newer Posts Older Posts Home
Subscribe to: Posts (Atom)