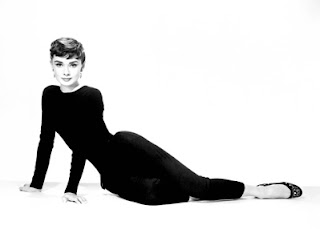 I’m wearing the rock-star-tight Chip + Pepper capri jeans I wore four years ago to seduce my then-boyfriend back into my romantic lady lair after a short break up. By “romantic lady lair” I mean "pants." And by “pants” I mean "heart." And by “heart” I mean “sacred vow of holy matrimony.” And by all that I mean, “give me your man seed so I can have a precious girl baby.”

Okay, I don’t mean any of that. But it all happened and we are both plenty happy about it, especially the girl baby. She seems to like life a lot. Plus she’s grown on us over the past year. We’ve decided to keep her.

But I did indeed mean to seduce him. You don’t jump up and down into a tight pair of denim capris with a very low Lycra content for just anyone. I mean, these pants are uncomfortable but they make me look like Audrey Hepburn so it had to be done.

Four years ago I scrubbed St. Ives Apricot Facial Scrub® all over my body with the zeal of a penitential Flagellant, applied Jergens Natural Glow® self-tanning lotion, blew out my hair, carefully applied makeup that I realized would melt in the June heat, and oh-so casually sauntered over to his house for “some beers and a laugh.” (His words.)

Maybe the “beers and a laugh” were his version of “denim sexy seduction pants?” I suspect they might have been. In fact, we did have some beers and many laughs, me in my tight pants and him sitting all the way over on the other side of the table. The two of us were like a couple of platonic buddies, with our heads-thrown-back and knee-slapping humor biathlon. The laughter was punctuated by many “Why, yes I will have another beer, thank you”s. We were complete frauds, of course.

As the night grew late, he asked me if I wanted another beer.

“Then let me get you one!” he said cheerfully and leaped out of his chair.

We sat on the deck and laughed across the table, pretending to be friends. Pretending we weren’t sitting in one of those blue plasma balls with the sparks just flying all over the surface. It was an electrical storm on that deck and while my hair stood on end, we wiled away the hours as though we hadn’t a care in the world. It was all oh-so casual.

However, the pants would not be denied. When it was time to say goodbye and I was ready to go, he touched my hand. In hindsight I realize the Pants of Seduction came off much faster than they went on. They were new then and I recall being somewhat concerned about their tendency to leave blue dye on my thighs. But the night was dark, the man was hot, and I don’t think he cared what color my legs were. Who knows? Maybe he has a secret Smurf fetish. Or maybe I’m just hot in any color? Could be.

Today, the pants no longer leave blue dye on my legs. Today is the first time I’ve been able to wear them since that summer four years ago. Shortly after we got back together I decided to quit smoking. Happiness can make you do foolish things like care about your health because you want to live a long life with your soul matey. Happiness can also make you gain 10 pounds. That’s how much a full heart weighs, apparently.

But today I’m in the seduction pants. It’s a warm June night. Perhaps I’ll ask my husband to have some beers and a laugh on the deck tonight after the babies go to bed. I wonder if he knows that these are the pants that brought him back? I suspect that he might, if only subconsciously. We were walking up some stairs earlier today and like a gentleman, he let me go first. Then he proceeded to growl in a most ungentlemanly manner when he saw the pants walking up the stairs.

Email ThisBlogThis!Share to TwitterShare to FacebookShare to Pinterest
Labels: audrey hepburn pants, how to seduce your man back, i'd seduce him all over again if I could, magic pants, my favorite person, my husband rocks my world, skinny pants