My Experience With Levi's Curve ID

I've never thought of myself as a curvy woman.
I have curves, yes. But according to Levi's Curve ID, I'm a boldly curvaceous woman. Which is fine. I have been doing a lot of squats and lunges at the gym, so it's nice to know that I've got something to show for it. Just call me Beyonce. J.Lo, step aside, por favor.
You can take the Curve ID quiz at levis.com for yourself. You'll be identified as having one of three figure types: 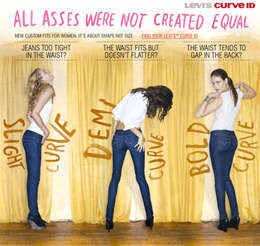 1. Slight Curve: Straight waist, slim hips and thighs.
2. Demi Curve: Evenly proportioned from waist to thigh.
3. Bold Curve: Defined waist, fuller hips and thighs.
I took the Curve ID quiz on the Levi's site, and discovered that I was a "Bold Curve" woman. The idea that a pair of jeans could actually fit my waist and not gap in the back was enticing, as promised to wearers of Bold Curve jeans.
At the Levi’s store, I tried on the Bold Curve skinny jean in Liquid Black. I selected the size I usually wear and also one size larger. Sometimes you have to size up for skinny jeans, right? 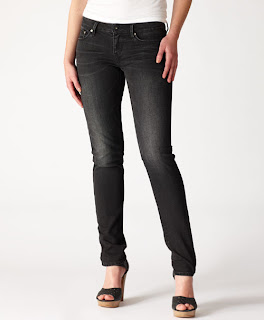 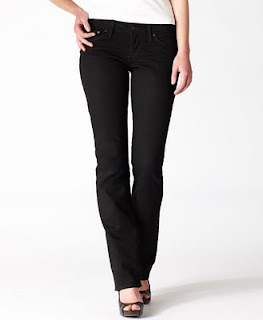 Let me tell you first and foremost, I had to heave and ho to get my regular size up and over my Bold Curve hips. Holy moly. I did get them over by leaping up and down in the dressing room. Thankfully all of those squats, lunges and frog jumps I've been doing have given me considerable athletic ability. I have no idea what the other patrons thought of the sounds coming from my dressing room. Perhaps they thought a kangaroo had gotten into the dressing room and was wrecking havoc with a pair of pants.
Let me be frank. The skinny jeans were brutal. They made my butt look not only big, but also unattractive — as though I'd never done a squat or a lunge in my life. The straight jeans were similarly cruel. You'd think they'd be a little more forgiving than the skinny jeans, but no.
Look, I've seen my butt naked. I know my butt and have worked with it for many years. The overstuffed derriere in those Levi's was not my butt. That ass was an impostor, wanna-be ass. It was the Dan Quayle of asses. 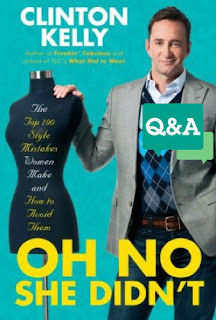 If I wanted to look like I have big hips, a big butt and big thighs I would shop in the juniors department. Maybe by "Bold Curve" Levi's really meant, "Will make you look fat even if you're not?"

My actual theory is that Levi's makes jeans for men and has no clue how to make clothes for women. I think the whole "Curve ID" fiction is about how to fit either a) teenagers or b) models. You've got your skinny models, your average models and then your Victoria's Secret models, and hence, those are the three Levi's body types. 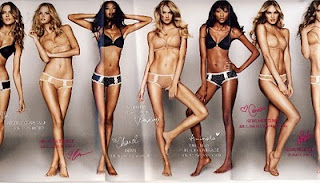 Fortunately I walked out of the Levi's store and down to The Gap to try on a pair of the 1969 line. I was able to try on pair after pair of skinny jeans that slipped easily over my hips and made my butt look as though I have indeed woken up at 5:15 in the morning to go work out for the past four months.
Thank you for that, Gap.
The jeans I tried on included: Legging Jeans in True Black, Always Skinny Jean in Over-Dyed Black Wash and Forever Skinny. The Always Skinny Jean has a lower rise and the Forever Skinny has a higher rise. I like to think of the latter as "Skinny Mom Jeans." 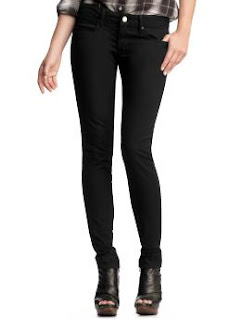 I wound up purchasing the Always Skinny.
All in all, I found The Gap's skinny jeans to be much more forgiving of non stick-straight women's figures than Levi's. Though perhaps lean, slim-hipped women have trouble fitting into The Gap's jeans? I don't know. Levi's may be a dream-come-true for little pixie-shaped women who have a hard time finding jeans. I guess the reason I'm taking Levi's to task is because they came up with this whole "Curve ID" nonsense to attract women of all shapes and sizes to come into their stores, only to offer jeans that seem remarkably unkind to curves of any kind.
I'd be curious to hear of other women's experiences in the Levi's dressing room, and to find out what kind of denim beast they sounded like while trying on jeans.
Posted by Mandy_Fish at 9:03 AM

New comments are not allowed.