I've Been Pulling My Pants Down A Lot Lately 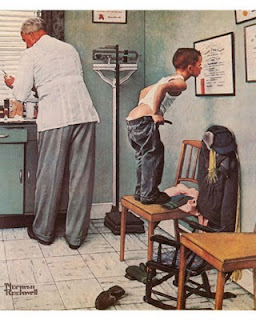 I went to see the doctor for a swollen eyebrow and ended up with my pants down.
How does that happen?
Sometime last weekend my eyebrow started swelling up. Each day I figured the swelling would subside, but instead it got worse. By Wednesday morning when I looked in the mirror, my eyelid was swollen too.
"Have a good day at work, Squinty!" My husband said.
"Quit staring at my eyebrow." We'd been having a conversation where he stared at my right eyebrow and not directly in my eyes the entire time.
"I'm not," he said, still staring at my eyebrow. "You look beautiful today."
"Shut up."
"You do!" he said and continued to stare at my eyebrow while trying to look earnest.
So I made an appointment with the dermatologist. Once there, she seemed rather perplexed by the swollen eyebrow.
"Are you sure you didn't use any new products or do anything different?"
"Yes, I'm sure," I said.
"Did you recently have your eyebrows waxed?"
"No, I'm growing them out."
"Have you used any new makeup?"
"No."
"Lotions, creams, soaps?"
"Nope."
"Did any sharp objects come in contact with your eye?"
"No!" I laughed. "I would have noticed that."
"Did you get bitten by a bug?"
"Not that I recall."
"Were you outside this weekend?"
"I was! I went to a corn maze!"
"Perhaps you were bitten by a bug in the cornfield?"
"Possibly!" I agreed.
She suggested cortisone, a topical antibiotic and an oral antibiotic. At the mention of cortisone I tried to raise my eyebrow (which I couldn't do, because of the swelling).
"Cortisone? How do you administer that?" I asked and then bugged my eyes out in an attempt to raise the eyebrow.
"In a shot."
"Where exactly would you administer this shot?" I began imagining a needle in my eye.
She pointed at her rear end.
"Ugh," I said.
"In fact, I recommend we do two. One in each cheek."
"Aw man!" I said.
"You've had children, you'll be fine."
Now that I've given birth to two screaming infants this has officially set the bar for my pain threshold. Actually, now that I think about it, the doctor's right. That is all you have to say to me and I'm on board. It's like an instant reality check.
So the nurse came in with two needles.
"How do we do this?" I asked. "I haven't had a shot in my rear end since I was five."
"Some people lay on their stomachs on the table, and some people just bend over and put their hands on the table like this," she said and demonstrated the position for me.
I weighed the comparable humiliation of laying on my stomach with my naked hindquarters facing the florescent lights versus just bending over and scooting my pants down.
"I guess I'll bend over," I said and sighed. "Should I pull my pants down now?"
It's moments like these that I'm glad I work out. In fact, I think having to pull your pants down is the motivation for all exercise on the planet. At least that's my theory and I'm sticking to it.
Fortunately the shots didn't hurt all that much going in. It is true that just having had a baby six months ago has set my pain threshold rather high. That and the fact that the epidural wore off before I had to push that baby out. Ha ha. I am woman, hear me roar.
What did surprise me was that by the time I walked out to the parking lot and had reached my car, both cheeks were already sore. Sitting at my desk was mildly uncomfortable all day and every time I got up out of my chair, I winced just a bit.
But if someone had told me on Wednesday morning that my swollen eyebrow would result in one shot to each cheek, I never would have believed them. Add to this the fact that just last Friday I had an IUD installed in my uterus.
It's a lot of public nakedness for such a private person.
Fortunately the IUD did inspire a great new haircut on Saturday. I told my hairdresser that I wanted "Sexy IUD hair" and I'll be damned if that didn't inspire her. I think I got the best haircut of my life.
Feel free to use that line as creative direction with your own hairstylist. It's very liberating. That and two shots of steroids to your butt and you'll be feeling pretty cheeky. 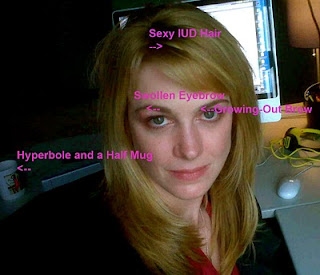 First attempt at Photoshop. Thanks to Steam Me Up, Kid for the mile-high technical advice.
Posted by Mandy_Fish at 9:59 AM