The Afterlife: Babies vs. Angels 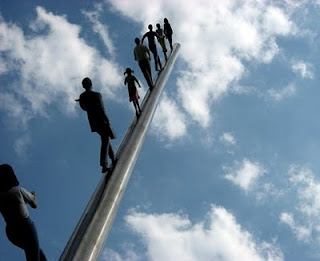 My six-year-old son Cracky was staring at his sister as she breastfed the other day.

"So you could breastfeed?" I asked, stating the obvious.

"Yeah. And so you could hold me like that. I wish me and Gracie were both babies."

"That would be a lot of work for me!"

"I wish when we died we could come back as babies," he added.

"There are actually some people who believe that's exactly what happens," I said, surprised that my son had come up with reincarnation all on his own.

"Sure. Some Buddhists believe in that. It's called 'reincarnation.'"

"Reincarnation? Jesus thinks when you die, you're dead."

"Um, I think he actually thinks you go to heaven when you die," I said, trying to stifle a laugh.

"I think it's some place in the clouds where you get to go and live when you die."

"I don't know. I don't think so." I cocked my head and thought it over. I half-considered telling him you get to be whatever you want when you go to heaven, or that you get 40 virgins, but I figured I shouldn't say too much about something I really didn't know for certain.

"Maybe we can. The Buddha believed that we never die."

"Because we come back as babies?"

"Well, that's one way. Will you remember when I die, that I'm not really dead? That I'll live forever?"

Links to this post
Email ThisBlogThis!Share to TwitterShare to FacebookShare to Pinterest
Labels: babies vs. angels, heaven, jesus vs. the buddha, reincarnation

The Cup Is Already Broken 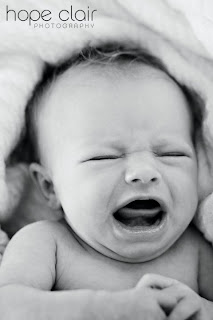 I watched the PBS biography of The Buddha a few weeks before my daughter was born. (Yes, that's her in full-throated fury, pictured at left.) I was struck by the words of one of my favorite writers and Buddhist scholars, Mark Epstein, who spoke about the phrase, "The cup is already broken."

It's an approach to life, to the things we own, to the people we love, to the life we have, to everything in this world. The things that we love and cherish, such as the beloved cup you use every day and can't imagine a day without, are all temporary. The cup will not last forever, so in many respects, it is already broken. So too with our deaths. These things are inevitable, so we might as well enjoy the interim.

It's all impermanent, you see. And this is not a tragedy. The blessing is that we ever lived at all, that we ever had a cup, that we ever had a moment of grace. The best approach is to recognize impermanence from the get-go. If we realize that everything is temporary, it lessens the sting of loss. It doesn't eliminate it, and it certainly doesn't eliminate the necessity of grief, but it puts future loss in its place. Rather than fret, "Will I break this cup? Will I lose this love? Will I die soon?", we recognize that the answer is "Yes" to all of the above. We are now free to set those worries aside for the present moment. In the future, we lose all things. What matters now is that we enjoy what we have, while we have it.

I had a lesson in "The cup is already broken" early on in life, thanks to my older brother, Charlie. My mother had taken me to a sidewalk sale at the strip mall that was located behind our house. Yes, my bedroom view was of the Dammon Hardware Store. I spotted a pair of Foster Grant sunglasses on sale, and they were grown-up glasses. They were made of real glass and had metal frames. My mom said I could have them if I was very careful.

Later that afternoon, I rode around on my orange ten-speed bike wearing my new sunglasses. I was circling our driveway and feeling cool and sophisticated, as only a pair of grown-up shades can make you feel. As I took the corner around the street and turned back onto our circle driveway, the glasses flew off my face and skidded onto the pavement. I leapt off my bike and retrieved the glasses, only to find the frames bent and the sides scratched. I immediately started crying and went into the house where I walked into my teenage brother.

He patiently took the glasses from me and re-bent them to their proper shape. He showed me that they worked just fine and they fit back on my face.

"But they're scratched!" I wailed. "They're ruined!"

"No, they're actually better now," he told me. "Now you don't have to worry about scratching them, they're already scratched. You can wear them on your bike, and if they fall again, you won't be upset by a few more scratches. They have character now. They're your glasses."

I stopped crying and stared at the glasses. What he said made a lot of sense. The glasses were no longer a burden of perfection, something I had to preserve in fear. They were already scratched. Now I could just wear them and not worry about them. They were better!

So my own version of "The Cup Is Already Broken" would be "The Sunglasses Are Already Scratched." And I learned this bit of dharma at the age of ten. Ever since I watched the PBS special on the Buddha and heard Mark Epstein use the phrase, I find myself repeating it in my head. On the morning my daughter was born, my husband learned that a good friend of his had died, and I couldn't help think of "The cup is already broken" as a way to soothe myself over the death of a 50-year-old man. Later that night as I approached giving birth and the flitting fears of pain or of something going wrong in childbirth, I again thought of "The cup is already broken" to soothe myself.

What will be, will be. I cannot prevent death. I cannot prevent pain. I cannot prevent whatever tragedy might happen. The only thing I can do is deal with the present and bear it as best I can. That same week, after having given birth on a Monday, I found out I would be losing my job on a Friday. The advertising agency I work for lost the account I write for. So you see, at some point, I will lose my job. Although I knew "The cup is already broken" when it came to my employment, here was the news that the cup had indeed fallen on the ceramic floor and smashed.

We'd had the account for 90 years, so it would have been easy to assume the cup was indestructible, so far as advertising accounts go. But even 90-year accounts will eventually end. Everything is impermanent and in the past few years we've all been acutely aware of that during a recession in the hardest-hit city in the nation.

In fact, some of you may remember I lost my job a year and a half ago, only to be re-hired six weeks later. So for me, the cup had indeed already broken, only to be glued back together again. The thing is, I've known ever since then that the glue would give at some point.

I read the news as I held my newborn daughter last Friday. This second-time-around I did not feel the white hot fear of how would I support my children, or how would I find another job in this town, during these times? No, I looked at my daughter and I knew that all cups break. This was just another cup and there are other cups out there too.

But the cup is not my life.

This cup can be replaced. This baby in my arms, cannot.

To learn more about the story of "The Cup is Already Broken":
"This reminds me of a famous saying of Achaan Cha, the great Thai monk. He would hold up a tea cup and say, 'To me this cup is already broken.' Everything is like this, already broken. Why does this upset us? When we think something is not broken, we think it is intact, that it is ours, so we have to protect it. And then when it turns out we cannot protect it, that we lose it, that it breaks, that it is taken from us — as everything always is — we go to pieces. We feel as if the world is not a safe place. We become paranoid and stressed out. But if we knew, with Achaan Cha, that things were already broken, that the nature of things — and of ourselves, especially and most importantly ourselves — is brokenness, and we could learn how to embrace and accept that, then I think we can live a happy life, appreciating the preciousness of what comes to us and goes from us."

From the site, Everyday Zen.
Posted by Mandy_Fish at 4:26 PM 28 comments