So You Have a Vagina 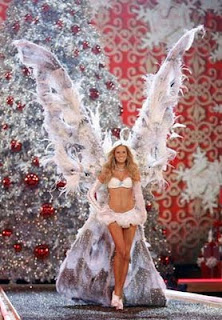 I'm having a girl.

Despite my protests that it wouldn't make any difference what sex my child was, within hours of finding out I had already dropped some serious change at Baby Gap, Old Navy and Nordstroms. So there is one difference between girls and boys, and that's that girls have a fierce selection of wardrobe options and retail adorableness available to their parents.

Did anyone else know that Roxy made baby clothes? I mean, seriously, how am I suppose to resist?

My son was ever the diplomat upon finding out he was having a sister. He didn't even pause, he didn't pout, he didn't look disappointed. He simply squealed, "I'm having a sister!" and that was that. Now that he stands about eye-level with my navel, he frequently hugs me and puts his face in my belly while announcing, "Hi baby! This is your brother, Cracky!"

Both Cracky and The Fiance like to put their mouths right up to my belly and announce their presence to the baby. I wonder if it startles her? They both want her to know them, so I encourage this behavior.

21 weeks into this pregnancy and I have officially popped. Unfortunately I'm probably not huge enough to be absolutely-positively-super-obviously pregnant, so I find myself humiliated to work out at the gym. There's no mistaking the volleyball sticking out of my tank top. It wouldn't bother me so much if I were certain everyone there were certain I was pregnant. But I'm not. So I wonder if people just assume I have muscular arms and legs and a fondness for beer. I also vacillate between trying to suck in my gut and pushing it out even further to make sure I really do look pregnant.

And I've had to increase the assistance on the pull-up machine each week. Either I'm getting weaker each week or I'm getting fatter.

Being pregnant isn't as cute as I remembered. I'm thinking I'm on to some sort of Mother Nature Conspiracy. You really do forget what it's like to be pregnant, give birth and raise a newborn after a few years. This is how you get tricked into thinking you can do it again.

Well, at least she'll be well dressed. And I'll have really buff arms and legs. I've already determined that I'm not recovering from pregnancy and delivery without a personal trainer. If Heidi Klum can do it repeatedly, what not me?

And I don't even have to strut around in a bikini with angel's wings, so I've got that going for me too. Though my new-found buxomness would suit me well in their lineup. Oddly enough, I'm not enjoying my voluptuousness quite as much as I thought I would. I find big boobs somewhat embarrassing. They stick out so rudely, so obviously. It's like they're trying too hard.
I miss my polite boobs. My aerodynamic chest. My sleek, svelte, cheetah-like self. Made for speed and predation. This larger, rounder, softer, more slothful me is made for fertility. And naps. The Fiance seems to like the latter.
Boys are so weird.
I think I'm fat, he thinks I'm phat.
Mars vs. Venus.
XY vs. XX.
Guess we do have some differences, aside from retail.
Posted by Mandy_Fish at 3:57 PM 41 comments 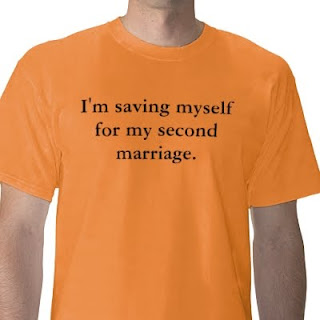 There's something much more romantic and uplifting about second marriages to me. I know to say that is practically akin to sacrilege, but for those of us who have been through divorce, we know it's true.
Isn't there something inherently beautiful about giving love a second chance? Isn't there something absolutely life-affirming when you've been broken-hearted, yet you pick yourself up and dare to risk it again?
It moves me, I tell you.
I don't know many people who have gone through a divorce who haven't said to themselves at least once (even if it was just a whisper): "Never again." I think that's a normal human response to pain. "Ouch that hurt" = "Don't do that again." Pretty simple, really.
But when it comes to love, marriage and babies — if you don't do that again, it could mean you might wind up living alone with a lot of cats.
Just kidding.
(Sort of.)
I love the triumph of the human spirit. I love that love can conquer all. Well sort of. In a global sense, I mean. Not necessarily in your first marriage. Ha. Just kidding. (Sort of.) I love that you can be chewed up, spit out and left for dead on the love highway, only to scrape yourself back up again and say: "I believe in me. I believe I am lovable. I believe I deserve love even if I screwed it up once before. Or ten times before. I believe I have learned something valuable here on the pavement of failed marriages. And therefore I will try, try again — except this time I'm a little bit older and a heck of a lot wiser."
The Fiance says he loves any story about the redemption of souls.
First marriages aren't about the redemption of souls. First marriages are about innocence. First marriages are often about a couple of kids who have no idea what life has in store for them. First marriages are about life-virgins. Second marriages are a little beat up, it's true. We've been rode hard and put up wet, you could say. But the two hearts standing there, risking once more to commit a lifetime to another person, they really know how much this can hurt. How much is at risk.
And yet they venture forth anyway.
Their faith isn't dead.
Their belief in love, intact.
You can't break the human spirit, at least not this one. And not the Fiance's. We won't mock marriage or innocence or second chances. We won't laugh at unintended babies either. None of these things are foolish, or accidents, or laughable.
These are acts of redemption.
It's a baptism by love and we can all be born again.
(You just have to believe.)
Posted by Mandy_Fish at 9:41 AM 43 comments