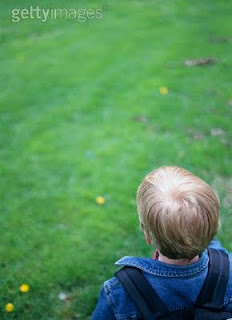 My son started kindergarten this week. This means he is officially a "big boy." And oh, he is.
I watched him stand in line outside the school doors and marveled at how tall and boyish he is. The baby is all gone. Long lean limbs jut out of his cargo shorts and short sleeves. He was all smiles and excitedly gripped his backpack as he waited for the school doors to open.

The parents were all greeting one another and coming over to say hello. His father was approached by at least ten people, social butterfly that he is. And then my son looked up at me and said, "That boy over there is wearing a cool shirt. Can I go over and tell him it's cool?'

I watched as he marched up to the kid, an older kid, and told him he liked his shirt.

Who are you? I wondered.

Who is this boy? Who is this friendly, outgoing, happy, self-possessed person? When I look back on my own first day of kindergarten, I clung to my mother's leg and howled as she walked down the hall. For the first hour or so of the day I refused to play with the other kids, despite my teacher's attempts to encourage me to play with the other girls in the play kitchen.

(Maybe I was crying because of the forced gender roles?)

But not my son. He was happy to find his kindergarten class, delighted to hang his backpack in his cubby, and proudly took his seat at the table. He immediately looked around and started talking to the other kids. He smiled at his teacher, and looked somewhat surprised that his dad and I were still there when we came over to hug and kiss him goodbye.

No, he wasn't like that. He just gave us hugs and kisses goodbye and happily waved goodbye as his father and I peered through the door.

I've always marveled at my son. He is this separate entity. He is not mine. I am merely here to hold his hand from childhood to adulthood, and then let go.

But I still marvel at him.

Where did he come from? Who is he? He is not me and he is not his father. He is more outgoing and confident than I am, and he is more tender and sensitive than his dad. Sure you can see a little of each of us in him, but he really is his own person. People often credit his various attributes to my good parenting, which I discount. I don't discount it because I'm modest. I discount it because I know this is simply who he is.

It is not the result of me or my work.

It is his nature, his temperament, the personality that was set in stone when his heart first began to beat in my womb. His genetic code was set and he would be who he is. Yes, I understand that this is Nature, and the other part is Nurture. So yes, his father and I may have each done a decent job of nurturing his nature to fruition — but he is still Cracky.

A certain Crackiness that is not my doing.

The innate Crackiness of him.

What a beautiful human being he is! I know most mothers will say such things of their children, but I say it not in ownership or pride. I say it as an observer. I observe that this strange human being that came into my world is lovely. Such a lovely, kind-hearted, funny, sensitive, thoughtful, caring, affectionate, confident, character-of-a-boy.

And I marvel as his personality continues to unveil as he grows. I know the five-year-old boy, but wonder who the man will be? Just as I wondered that first day I discovered he was in me. I sat on my porch rubbing my belly, mystified and incredulous that a separate entity resided within me.

And I still say it now.

That's the beautiful mystery of children. They are not ours. They are their own. We are merely temporary custodians.