The Sheet of Secrecy and Other Vaginal Mysteries 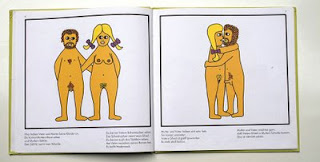 My five-year-old son's curiosity about sex and babies has continued unabated.
Now that I've scientifically answered "Where do babies come from?" the boy wants to know "How do the babies get out?"
"The birth canal," is not cutting it as an explanation anymore.
"Where is the birth canal?" is the new refrain. "Is it here?" He waves his hand over his belly-area. "Is it here?" He waves his hand over his pelvic area. "Do babies come out of the mama's toes?"
Oh lord.
"How about we buy a book?" I suggested. I don't know why it took me so long to think of this. I'm a little slow on the uptake sometimes.
"Where's the Sex Ed for Preschoolers section?" I asked the Borders lady. She took me to the Sex Ed section (they actually have one!) and showed me three titles that were appropriate for the preschool/kindergarten set.
After previewing them (and snickering at the pencil-drawn naked man and woman, with their hairy gender-specific parts) I couldn't decide which Cracky would prefer. I decided to turn it over to him.
"Which book do you like best?"
"Let me see," he said, all business. He grabbed the three books, sat on the floor of Borders and started flipping through the pages. He studied each drawing, nodding his head here and there, asking me, "What's that?" and approving my answers ("Those are sperm, that's the vas deferens") as he scoured the books like a doctoral candidate.
When he got to the page with the baby pictured in its mother's uterus, I could feel his excitement build. He flipped the page and at long last beheld the birthing room. There stood the doctor, poised between the mother's legs. The nurses and father were standing by. Mother pushed and did her lamaze breathing behind a modest sheet draped across her legs.
"What?" he said, confused, bordering on outrage.
He quickly flipped the page back, then forward, then to the next page. He flipped through several times, frantically looking for the birthing scene.
"I think a page is missing!"
"What do you mean?" I said, feeling like a fraud.
"Here's the baby inside the mother's tummy," he explained, clearly exasperated. "Here's the doctor and the mother with the sheet over her tummy. Why's that sheet there? And then here's the baby."
"Yep, that looks right to me!" I chirped.
"But HOW does the baby come out? Where's the HOLE?"
Crap.
"The baby comes out of the mother's vagina," I said, at long last.
"There's a hole in the vagina?"
"Yes, and it stretches so the baby can get out."
"But where is it?" he flipped through the other books, only to confront the same draped sheet of modesty. "Why do they have the sheet over her? I can't see!"
"I think they put it over the mother so she has some privacy," I said.
"Oh. But I want to see the baby come out."
"I might have to buy you a DVD for that," I said, recalling a Miracle of Life video on PBS or the Discovery Channel.
"Yeah, let's get that!" the future doctor said.
As I sat there and thought about my son's thwarted curiosity, and how matter-of-fact he was about the w(hole) thing, I realized that it was my fear of revealing that a baby comes out of a mother's vagina, my discomfort. Five-year-old Cracky is not shocked or surprised by anything. It's all new to him, so nothing is a surprise. If I say a baby comes out of its mother's vagina, and that the vagina stretches so the baby can get out, it is no more shocking to him than the fact that the stars are planets or that a caterpillar turns into a butterfly.
He finally relented and picked the least disappointing of the sex books, the one with the picture of the baby happily floating in his mother's tummy. He decided he could live with the SHEET OF SECRECY in the birthing room, and we went home to read it three more times before bed.
When I closed the book for the last time that night, Cracky put his finger in the air and raised his eyebrows.
"I have a great idea!" he said and reached around to grab the throw blanket from the back of the couch. "You go lay down on the floor. I'll put this over your legs and we can pretend to have a baby! I'll be the doctor!"
He busily started unfolding the blanket and was just heading towards the floor when I finally managed to speak.
"Noooooooo way!" I said.
"What?" he looked up, honestly confused by my reaction. "Why not?"
"I already went through this once! For real. I'm certainly not going to act it out again." I was laughing and kind of shocked all-at-once.
"Oh. Okay," he said, and scrunched up his eyebrows. But I knew what he was thinking.
He was totally thinking of the girls at school. And I totally knew I'd be getting a call from his teacher the next day.
Oh well.
I'll let the school know I have a video they can borrow.
Posted by Mandy_Fish at 11:49 AM 46 comments

Links to this post
Email ThisBlogThis!Share to TwitterShare to FacebookShare to Pinterest
Labels: Cracky, Parenting, Vaginas and other cosmic holes, Where do babies come from 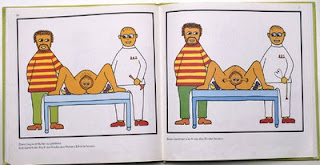 "Mom, where do babies come from?" my son asked as we were enjoying a summer evening on The Boyfriend's deck.
"I've told you, they come from their mothers' tummies," I said, somewhat surprised at this out-of-the-blue question.
"I  mean, how do babies get out of their mothers' tummies?"
"Through the birth canal, didn't I tell you this already?" I asked and smiled at his sweet little choir-boy face.
"Yeah, but I think I know how babies really come out of their mama's tummies."
Ruh roh.
"Okay. Tell me." I was careful to remain light and calm, though I figured this would be good.
"You'll get mad."
"No I won't. Just tell me and if you have it wrong, I'll correct you. But I won't be mad."
"Well Ben at school told me that babies come from their mother's nuts."
Pause.
The sweet cherubic face stared at me, waiting for my response. Braced for anger, perhaps. The Boyfriend and I stared at each other, each caught in a stunned moment of silence. I fully expected him to laugh first, but the bastard kept his shit together. I, on the other hand, collapsed into a fit of laughter.
"What? What's so funny, Mom?" My son was smiling nervously, confused.
"Oh baby, girls don't have nuts," I managed to choke out, just to assuage any fear of his mother's wrath for saying a word he obviously knew was loaded.
"They don't?"
"No, only have boys have nuts." I heard The Boyfriend finally start to snicker across the table. But I stumbled through. "Do you know what nuts are?"
He nodded.
"Where are they?" I asked.
He pointed at his nuts.
"Okay, so you know boys have nuts and a penis. Well, actually 'nuts' isn't really the polite way of referring to them. You really should call them 'testicles.'"
"Testicles?"
"Yes, that's more polite. Calling them nuts or 'balls' is considered rude. Anyway, boys have testicles and penises, and girls don't. Girls have a vagina."
"You mean that flat thing?" He scrunched up his face and made his hand flat.
"Yes, where you have a penis and testicles that stick out, girls have a vagina, which is flat, relatively speaking."
He nodded his head soberly.
"What are the other names for 'vagina?'" he asked, rather shrewdly, I thought.
"I don't know," I paused and looked at The Boyfriend. "Do you care to fill Cracky in on the other names for vagina?" I smirked.
The Boyfriend just shook his head, mouth clamped shut. I have never known the man to miss an opportunity to talk about vaginas and nuts, but now Mr. Prolific was suddenly at a loss for words.
"I think we should stick with 'vagina,'" I explained to the boy. "It's more polite."
Just then The Boyfriend caught my eye and mouthed the word Poontang, which I studiously ignored.
Though that'd be quite a word  for Cracky to teach Ben. It'd be a nice little tit-for-tat for Ben's parents at their dinner table, I think.
"Mom, Cracky told me babies come from their mamas' poontangs."
What?
At least it'd be anatomically correct.
Posted by Mandy_Fish at 3:07 PM 44 comments

Links to this post
Email ThisBlogThis!Share to TwitterShare to FacebookShare to Pinterest
Labels: MOTHER OF THE YEAR, nuts, parenthood, Parenting, the birds and the bees, Where do babies come from
Newer Posts Older Posts Home
Subscribe to: Posts (Atom)