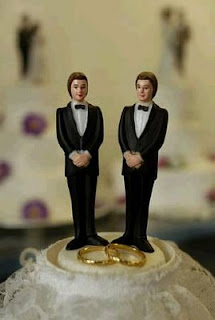 "Boys can't kiss boys!" my son shouted, turning away from the television to laugh with me.
"Sure they can," I said.
"They CAN?" he said, and scrunched up his face to show his amused disgust, a practiced look I'd seen on one of the more inbred boys in his class.
"You kiss your dad, don't you?"
"Yeah."
"And your dad kisses and hugs your Papa, doesn't he?"
"Yeah."
"So there you go," I said and shrugged. "Boys can kiss boys."
"But boys can't get married, can they?" he repeated the exaggerated disgusted face from the oaf at school.
"Sure they can," I said, immediately deciding that I wasn't going to get into a discussion of the law with a five-year-old.
"They CAN?" he looked surprised and watched my face to see if I was serious.
"Sure why not? If you love someone you can marry them," I shrugged again.
"And can girls marry girls?" Now his eyebrows were raised and he wasn't making the stupid Deliverance face.
"Absolutely."
"Oh. I didn't know that," he said, and went back to playing with his superheros clad in tights. "I'd like to go to a wedding."
"Me too. We could get you a suit."
"I'd look handsome in a suit."
"Yes, you would," I said, and closed the conversation that could have turned my son into a homophobe but didn't. For today.
Uncle Stephen is coming over tonight. He has a new boyfriend about whom he is all a-flutter. I accused him of acting like a lesbian because you'd swear these two were ready to move in after their second date. He sends me giddy little love text messages that make me smile and feel as though the world isn't about to collapse.
"I think I'm pregnant," he texted me this weekend.
I know he was kidding, but I'll have to talk with him about the importance of getting married first. Besides, Cracky and I want to go to the wedding.
Posted by Mandy_Fish at 8:47 AM

Email ThisBlogThis!Share to TwitterShare to FacebookShare to Pinterest
Labels: Love, parenthood, the gays