Why Are They Pushing It In So Far, Mama? 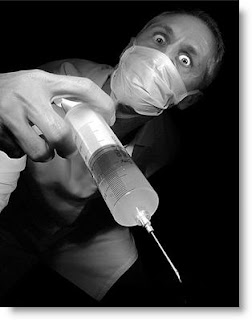 Because I am a procrastinator, I waited until the last possible moment to get my vaccinations for India. I have a few, grievous phobias which cause me to pass out. I've covered this before, but just to recap: Crowds and Needles. The centipede phobia only causes me to scream bloody murder, but I have never lost consciousness at the sight of one. Yet.

So I can only get an appointment at the Passport Health Clinic at 5:30 p.m., which means I have to pick up my four-year-old son first, and take him with me. Now I've gotten much better about shots in my old age, and I'm pretty much fine if I don't see the needle and they don't take blood. I got a Tetnus shot last winter and did not pass out.

I thought everything would be fine.

I sat in the chair and decided to put on a brave face for Cracky. The first shot went in and I didn't even flinch. While the second shot was going in, my son announced:

It was then that I started to hear the distant train whistle of unconsciousness, and then the roar of the engine took over my entire body.

"I think I'm going down," I announced to the two nurses, who immediately stretched me out on the floor. I awoke with a cold compress stuffed beneath my neck and two worried nurses peering at my face.

"Get it over with," I groggily responded. My son got up from the chair where I think he'd been crying to come watch the proceedings again.

I felt the nurse pinch the flesh on my limp arms to inject the rest of the shots.

"Why are they pushing it in so far, Mama?" my son chimed in.

Note to self: Do not bring son to any future doctor's appointments.
Posted by Mandy_Fish at 10:09 AM