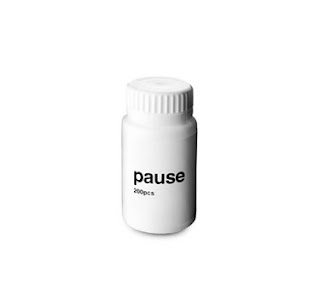 I didn't publish a blog on Friday that made fun of someone's enormous face. I did it in the name of the buddhist precept, "Right Speech." I usually know when I'm not using "Right Speech" because I have a nagging sensation that I'm not being nice and whatever it is I'm about to say or write, I probably shouldn't.
Of course, impulsive youngest child that I am, I usually shrug off that feeling (dismiss it as "No Fun!") and go ahead and go for the laughs. But I tried something different on Friday, and then wound up reading about "The Sacred Pause" on Sunday.
The Sacred Pause is that moment when you choose to not react, to not be impulsive. That moment when you overcome your own pressing need to be heard, to vent, to matter. If we could only just pause and listen to what someone else has to say rather than trying to get a word in edgewise, or if we only paused long enough to consider our own misgivings for what we are about to do, we might actually save ourselves a lot of grief.  We get more perspective on the situation if we just shut our mouths.
It's hard to think and consider, to weigh the situation objectively, if you're constantly reacting. In the reaction mode we defend ourselves, we fight, we try to win regardless of the bloody aftermath. When you pause you actually gain the advantage, if you think about it.
You can watch while your opponent (whether it be friend, lover, co-worker, Self) flails, yells, prattles, cries — and in  your pause you might actually learn something. Maybe you'll notice their body language, perhaps you'll hear their words, perhaps in  your own moment of stillness during the cyclone that's hit, you'll realize what is actually going on behind the surface. You can at least figure out what your own motivations are. You'll be less likely to regret something you said, in self-defense or anger. And when you're battling with Self, if you pause, you may actually discover that there is no demon. There is no fight.
It was only a moment. A moment of fear, of rage, of insecurity — whatever — and it passed like the thousands of ceaseless waves that crash upon the shore and slide gently back to sea. Why fight the waves? Why scream at them for threatening the sand? So many useless, wearisome battles. If we keep fighting them all, we'll be used up, dried up things by the time it's time to die. I don't want to live my life fighting and regretting.
I like the idea of hitting the Pause button. Seems we're always pressing Play. Or we get hurt and insist we're pressing Stop and we're not going to listen ever again. Pause offers a Middle Way. Pause says we're just going to rest a bit while we consider. Pause implies we'll play again — but not just yet.
There's much to learn in silence.
By pausing on Friday I learned that it was my own insecurity that caused me to write that blog. I couched it in humor and it certainly would have made you laugh, but my insecurity was misplaced. To direct any unkindness towards a girl who once dated my boyfriend, or towards any of the women he may have dated, is just perpetuating the hurt in my jealous, fearful heart.
Let it go, baby.
You won. There are no more demons to battle, no girls to mock. Let them go nurse their heartaches undisturbed by you. Let them go and love others, free from your judgement and superiority. Turn your eyes to what you have, right now.
The past is nothing. The future unknown. Happiness lies here, in this moment now. Let us pause here for a spell.
(Source: I'm currently reading Radical Acceptance: Embracing Your Life With the Heart of a Buddha by Tara Brach, PhD. The "Sacred Pause" comes from her book.)
Posted by Mandy_Fish at 8:59 AM

Email ThisBlogThis!Share to TwitterShare to FacebookShare to Pinterest
Labels: Not Being Such A Bitch, The Buddha, The Sacred Pause