Stealing a Centipede's Life and Other Buddhist Parenting Hypocrisies 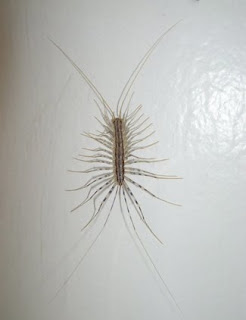 I was trying to get the key in the back door when I heard my son furiously stamping on the porch. I turned around and saw him stomping on a bunch of tiny ants.

"WHAT ARE YOU DOING?" I gasped.

"I'm killing these ants," my son said and stared at me round-eyed.

"'Cause they were moving around."

We stared at each other.

"Were they hurting you?" I asked.

"No," he said, his eyes getting bigger and more troubled.

"Well then why did you kill them?"

We stared at each other.

"I didn't mean to!" he said, eyes getting bigger and sadder, the full impact of his actions now dawning on him.

"You need to be careful about killing things. It's stealing life, and you can't give it back. Those ants weren't bothering you, they weren't hurting you, and you killed them forever."

Now he looked like he was about to cry. My work was done. Time to reel him back in from the edge.

"It's okay. But just promise me you'll never kill anything that's not harming you, okay?"

"Okay, Mama! I will never steal an ant's life again!"


Fast forward to yesterday morning. As I'm putting the finishing touches on my shimmery face, I hear my son begin to whimper in the hallway.

"Mama, there's something SCARY in here!"

I freeze, mid-dusting of bronzing powder and feel the hairs on the back of my neck stand up. I walked into the hallway with my make-up brush held out before me like a switchblade.

"What is it?" I asked, nervously looking down the hall.

"THAT," my son pointed to the floor at the end of the hallway.


"AHHH!" I yelled and jumped straight into the air.

"Oh no!" my son yelled and ran into his room where he started to cry.

I have an enormous and well-documented phobia of centipedes. I have even discussed it in therapy. It's that bad. I usually cry and scream and run away. I have had several shriek-y battles with them involving Edge shaving gel and other people's shoes. I once saw the granddaddy of all centipedes take a free fall from the ceiling and land on my husband's chest. I had to divorce him after that.

So in this moment, my fear putting me on full-tilt irrational panic attack mode, and my weeping son beckoning me to be strong, I was caught. Fortunately my love for my son enabled me to get out of my freak-out-induced paralysis, and I went to his room and hugged him.

"It's okay, baby. It's just a centipede. It's a scary-looking bug and mama is afraid of them too, but I will get it for you."

"Mama is going to be a super hero and get that centipede for you," I said and marched out of his bedroom in search of a shoe I didn't care about.

I held the ratty flat sandal I use for gardening out before me. I felt like I was going to throw up, but I lunged forward and squished the huge, hairy, wriggling beast.

"GAH!" I yelled, shuddering as I heard it crunch.

"Did you get it, Mama?" my son called, still sounding weepy.

He came out and stood next to me, and we examined the remains of the beast.

"What are all those things?" my son splayed his fingers out to represent the multitude of legs and grimaced. I grimaced in return.

"What do you call that thing? Anemone?"

We stood in silence, watching our fallen enemy. He had been a worthy opponent.

"I only kill centipedes. Nothing else," I added.

"Only centipedes. Not ants."

I'm totally certain if there had been centipedes in India, the Buddha would have put a disclaimer on that whole "Do Not Kill" thing. I'm sure of it.
Posted by Mandy_Fish at 9:58 AM

Email ThisBlogThis!Share to TwitterShare to FacebookShare to Pinterest
Labels: Centipedes From Hell, Parenting, The Buddha