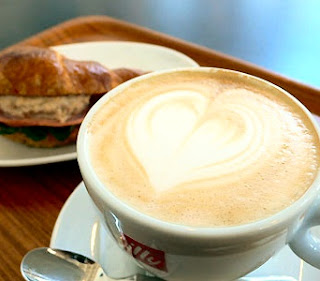 The coffee creamer war is over.

For a long time, during the dark ages here at the agency, we had to buy our own coffee. Many a gray employee tromped down flights of stairs to the belly of the building, to a windowless "cafe" of sorts, next to shipping and receiving, and a lone ATM. There you could buy a cup of coffee for a dollar, and if you filled up five punches on your coffee card, you could get a free one.

Oh man, that got me. Kremlin-Gulag Agency was so stingy, whereas my former employer (YES-IT'S FREE, Inc.) brewed vast vats of Starbucks brand coffee and plied us with free Twix and Kit Kat bars. But the sun shone down on we weary advertising hacks, and a golden coffee maker was bestowed upon us from our now-benevolent ruler.

No sooner had the serfs sated themselves on free coffee, they began to fight amongst themselves. Some of us brought our own creamers, of varying flavors and fat contents. We brutally scrawled our names on the containers, in large angry-Sharpie-medium-point print.

"THAT ANNOYING GUY IN THE WINDOWLESS CUBE"

Despite the clear demarkations of our cream, there were thieves amongst us. Soon notes were taped to the cabinets in the employee kitchen, and ominous floor-wide emails were sent, admonishing the greedy peasants for stealing from their neighbors.

"IF IT DOESN'T HAVE YOUR NAME ON IT, IT'S NOT YOUR CREAM!!!!" the messages hollered at us.

It sort of made me want to steal other people's cream, despite having my own clearly-marked cream. Maybe other people had better cream if theirs was being stolen? I mean, sure I bought the fat-free, but everyone knows the full-fat tastes better. Maybe if I stole it the fat grams wouldn't count? Plus the idea of stealing cream, right there in the middle of our corporate town square -- anyone could catch me! What if they saw me adding a huge dollop of "SALACIOUS BEE" cream to my non-salacious cup?

Oh, the very thought of it gave me the tingles.

But I didn't do it. Because of the Buddha. He's always telling me not to do bad things. But my co-workers, non-believers that they are, went on stealing from one another, and the hatred grew. We now passed one another in the cube-corridors, slit-eyed and suspicious.

"FUCK YOU!" I would scream back at her, my guilt from coveting her cream as clear as the florescent lights above.

Kremlin-Gulag Agency was in a bad state of affairs. Rather than bringing joy and peace to the agency, the free coffee had brought hatred and in-fighting amongst the formerly peaceable copy writing and art directing plebes. I trembled in my cube, afraid to venture out into the now-lawless second floor. Though I hadn't noticed anyone stealing my cream, I lifted it carefully each morning -- shaking it, listening to it, trying to determine if any of those bitches had sipped at it.

I'd become someone I no longer knew. It was with a heavy heart that I walked to the coffee maker yesterday morning. Resigned, I opened the refrigerator and braced myself for the hate-speech scrawled across cartons of half-and-half.

"FREE CREAM FOR EVERYONE! THE INTERNATIONAL COFFEE CREAMERS OF PEACE ARE HERE! HELP YOURSELF! THERE'S MORE CREAM WHERE THAT CAME FROM!"

A message like a sweet call from an angel on high! I looked past the note, to rows and rows of assorted International Coffee Creamer bottles. There was Southern Butter Pecan, Irish Cream, Vanilla, Hazelnut, so many flavors, both fat-free and full -- I stood in the open door of the refrigerator and wept.

For it was as the Buddha always said: "Hatred does not cease through hatred at any time. Hatred ceases through love. This is an unalterable law."

Salacious Bee came around the corner and our eyes met, mine moist with tears.

She opened her arms to me, wide-open in her forgiveness. I walked to her and stopped a few feet short.

"Don't fuckin' touch me," she said with a grin.

Peace had returned to the agency. Through love, not hate.

Email ThisBlogThis!Share to TwitterShare to FacebookShare to Pinterest
Labels: Cream, The Agency, The Buddha