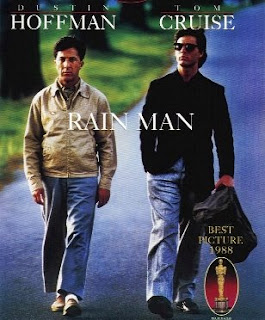 My friend K has worked with the mentally ill and impaired for much of her life, and has many family members with Autism. She is an expert. I recall going grocery shopping with her, and she repeatedly standing at the end of the aisle, barking at me.

"What?" my head would snap away from the box of cereal I had been staring at, pulled out of a reverie.

"Oh. My. God. You're mildly autistic," she would laugh and shake her head.

"Really? I seem autistic?" I would reply, head-cocked to the side, vaguely interested.

"You're doing it right now!" she would yell, and burst out laughing again.

I can't tell you how many times we had this identical conversation, with my slow and unalarmed responses repeated word-for-word.

Since then, I have also named it "ADD-lite" or "Autism-lite" to account for the spacey, stuck-on-a-record-in-a-groove quality that there can be in communicating with me. Most of you wouldn't know this, since we've never met in person. Fortunately for those who love me, I think it's viewed as "cute." As you can imagine, it could prove annoying over time. Actually, I had a boyfriend who used to go apeshit over my communication style.

I never understood why he got so mad.

He even got mad at my classic facial expression: Scrunched eyebrows, pursed lips, cocked head.

"Quit looking so mad at me! Say something!"

"If you can't tell me what you're mad about, if you can't COMMUNICATE, this relationship is doomed!"

"DAMMIT! COMMUNICATE WITH ME!"

"I'm trying to," I'd say, honestly perplexed. I neither understood his anger nor his complaint. Clearly I was processing his request.

"Okay. Let's see. What am I mad about....ummm," I paused, hummed, and tried to focus in on my brain again, so I could find some material for him. While searching, I lost track of time outside my brain.

"JUST FUCKING FORGET IT! YOU ARE IMPOSSIBLE!" and he would storm out the door.

This was, essentially, our entire relationship. We even went through three couples counselors, to no avail. I could never make my gray matter fire quickly enough to count as "communicating" for him, and he could never slow his gray matter down enough to wait for mine.

Recently, The Boyfriend brought his dog over to spend the night. I noticed the dog was continuing to get thinner and thinner, and recalled I'd meant to ask him about this before and had forgot.

"How much do you feed Louie?"

"Huh. You might want to feed him a little extra. He could use it."

He again explained how much he fed the dog, and how the dog had been overweight. He may have acknowledged that he could give the dog some extra.

"Well, you sure could feed him a little extra, it certainly wouldn't hurt."

The Boyfriend gave some sort of reply.

The Boyfriend said something.

"Yeah, I got that. A little extra, I will give him a little extra," The Boyfriend's reply broke through the fog of my brain this time.

"Yes, a little extra," he said, laughing. Now he was clear as a bell. "You realize you've said that over and over again."

"Said what over and over again?" I looked at him and cocked my head, furrowed my brow.

"A little extra," now he was laughing. Hard.

"A little extra," I repeated, and giggled.

"A little extra," he repeated, immitating my deadpan Rainman-style of delivery.

"A little extra," I said, and started gasping for breath, laughing, now realizing how ridiculous I must sound.

Someone who gets me. Or who doesn't get mad at me, I should say. And now anytime we say, "A little extra," it is guaranteed to result in a volleying back and forth of Rainman-esque "A little extras."

Of course now I notice that memory loss, difficulty focusing and slowness, are all symptoms of Hypothyroidism. Oy. If only I'd been going to the doctor all these years, I wouldn't have misdiagnosed myself as Autism-lite or ADD-lite or "lite" anything.

Email ThisBlogThis!Share to TwitterShare to FacebookShare to Pinterest
Labels: Rainman